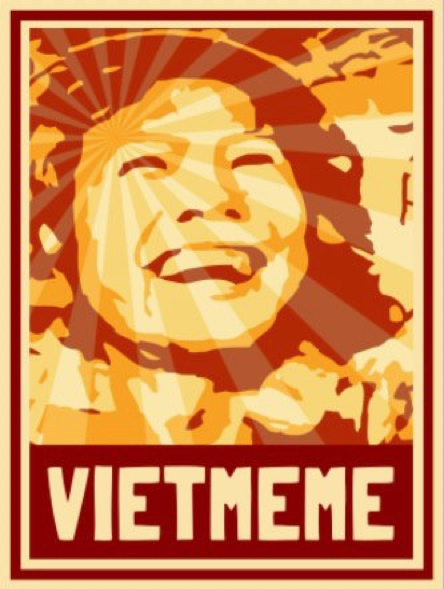 In the final section of a three-part interview with Patrick Sharbaugh of Vietmeme,we look at the culture of the internet and how the internet is shifting citizens’ world views. See Part One and Part Two.

Tell us a bit about your research into the culture of Vietnam’s internet.

Vietnam’s Internet culture differs from Western culture in ways big and small. Last year, for example, I did a research study on Vietnamese conceptions of online personal privacy. In teaching my Cybercultures students at RMIT University, I couldn’t help noticing that when we discussed the challenges the Internet and our digital devices have created for traditional notions of public and private space, few of them seemed to share my concern. It made me wonder if they and I had totally different ideas of what’s meant by the word ‘privacy,’ for which there’s no perfect analogue in the Vietnamese language. So I did a big quantitative and qualitative research study and I discovered that they don’t really think about privacy the way most Westerners do.

For us, again, that concept is bound up in Enlightenment-era values of individual autonomy, free will, the rights of the individual, the social contract, democratic participation, all that stuff we take for granted. Privacy for us is a fundamental right that’s guaranteed by the State (well, it used to be, anyway). But Vietnamese appear to care little about those things. They seem totally unconcerned by third-party tracking, for example, whether that’s the government or big commercial operators. They view privacy only as something like locking your door — taking individual measures to assure that malicious individuals out there don’t get valuable information like your passwords or account information that they could use to steal — literally steal — from you and your friends. They certainly don’t see privacy as a right, but as a responsibility, much closer to the idea of personal security than anything else.

While the governments of representative democracies like the U.S. derive their legitimacy from the will of the citizens, a government like Vietnam’s (or China’s) derives its legitimacy from the fact that it is in power and controls the entire state apparatus from top to bottom. Questioning that authority is absolutely forbidden under any circumstance. So the Vietnamese have become quite adept at practicing strict self-censorship online, especially as regards so called ‘sensitive’ topics (dirty laundry, sex, politics, democracy, corruption, multiple parties, anything that might make the CPV lose face). Everyone here assumes that everything one says and does on the Internet is being monitored by the State (though in reality that’s highly unlikely), and that any person is only a single comment away from being charged with ‘abusing democratic freedoms.’ But it’s not only fear at work here. Many, perhaps even most Vietnamese, feel that certain kinds of sensitive content should be censored; otherwise, dissenting voices risk disrupting social harmony on the Web. So this all puts the markedly high level of engagement we do see here into a different context. 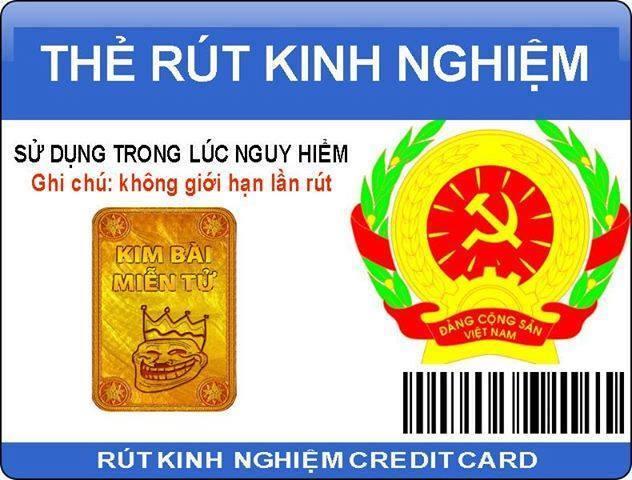 Vietmeme translates this, “Get Out of Trouble Free card, for government officials. Use in dangerous situations to avoid penalties of all kinds. Unlimited usage.”

Can you set the stage for us outsiders to understand some the larger influences on internet culture in Vietnam?

Not many people realize it, but Vietnam has 90 million people. That’s small compared to India or China, but it makes it the 13th largest nation on earth in terms of population; it’s not insignificant. And over the past 20 years or so, the country’s undergone tremendous economic growth, one of the fastest in the world. Yet only about 20 percent live in urban centers like Hanoi and Ho Chi Minh. The rest are often living in rural conditions not far from what you might have seen 50 or 100 or even 200 years ago. Parts of the nation are very highly developed — there are 120 million mobile phone subscriptions for those 90 million people, including 20 million web-enabled smartphones — but only a tiny fraction of the population has a bank account, much less a credit card.

Partly because of the absence here of a single, monolithic conversational platform like weibo in China, the discussions taking place online are perhaps hard to see, as they’re spread across a range of platforms and sites. Vietnamese participate with less of the kind of fireworks you see on Weibo in China — although that’s there as well, increasingly so. But much of it is in more subtle, creative ways that form a widely dispersed but seething remix culture. For example, Vietnamese are huge fans of the JapaneseDoraemonmanga. There’s a huge community of people who like to remove the original Japanese language dialogue in those panels and replace it with pithy Vietnamese versions that often make an oblique commentary on contemporary Vietnamese society or news. Overlaying Vietnamese text on images and photos is very popular; or it might be mock captions for news photographs, alternative dialogue pasted onto movie stills, film posters that have been altered in Photoshop and retitled, classic images from Disney animated film stills that are reconfigured into what look like manga panel cartoons with Vietnamese dialogue bubbles.

Modern-day Vietnam is one of the world’s few remaining Communist states; it was created more than a half century ago along strict Marxist-Leninist principles. But, like China, they abandoned the economic side of that political philosophy for state-controlled quasi-free market reforms in the late 1980s, and now the country is in the grip of a sort of turbocharged hypercapitalism in which the individual acquisition of wealth often seems the only thing that matters to anyone.

Netizens mocking a recent statement that Vietnamese traffic police (who are largely seen as corrupt) only make enough for one banh mi (a popular sandwich) a day. Vietmeme translates, “Good comrade citizens, support the continuous system of police nutrition by providing water and banh mi!”

The country is, however, in a classic pickle for authoritarian states these days: it fully grasps the critical importance of Internet access for economic and social development, but it also knows the openness of the Internet threatens the state’s traditional monopoly on communication. 34% of the population is now plugged in to the Internet here; shutting down or limiting Internet access or social network access risks radicalizing otherwise satisfied citizens and also doing great damage to the economy, not to mention foreign relations.

But probably the most important and exciting aspect of Internet culture in Vietnam today is the way it’s bringing about seismic shifts in people’s worldviews. They’re discovering alternative cultures and ideas and lifestyles and political ideologies and social relations and belief systems that were inconceivable to them a few years ago. They’re becoming global citizens. The country no longer exists inside a closed information bubble controlled by self-serving officials in which the Vietnamese way is the only way.