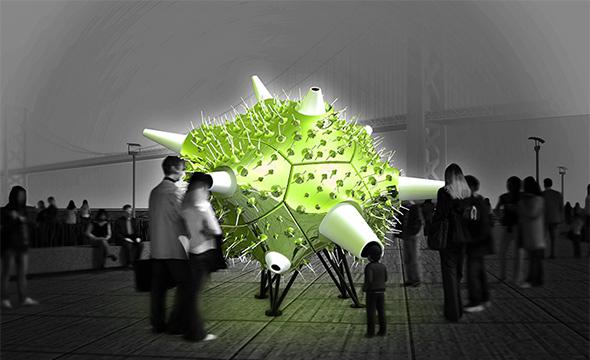 A couple weeks ago, Ben Valentine and I had a chance to speak at the Yerba Buena Center’s Dissident Futures Art and Ideas Festival alongside arts/tech writer and researcher Dorothy Santos.  Our topic was, simply, “The Honeymoon’s Over—Arts and Culture Criticism in the Age of Networked Power”, a look at utopian narratives about the internet and how to critically evaluate them.

I spoke very briefly about my research on memes, research that has spawned this site and many other projects that will soon be announced.  And I advocated for a more balanced understanding of the benefits of the internet. Because when we think about social change, we have to remember that there are many elements of social change, some of which include expression and some of which include organizing.

Zeynep Tufekci, as summarized recently by Ethan Zuckerman, helped me wrap my head around this distinction as it relates to the internetz:

Protests are very good at grabbing attention and putting forth counternarratives. They create bonding between diverse groups. They also signal capacity, but it’s a different capacity than it might have been fifteen years ago. Zeynep tells us that this is not a “cheap talk” argument – protesting isn’t too easy – it’s just that a protest isn’t going to topple the government. This isn’t a slactivism argument either – it’s an argument about capacities. The internet seems to be very good at building a spectacular local optima – a street protest – without forcing deeper capacity development.

This expression part is something that seems, to me at least, very obviously a strong part of what the internet has enabled. But this latter element of organizing is something we still need to understand better.

I’ve invited Dorothy and Ben to summarize their talks, and I’ve included their writings here. 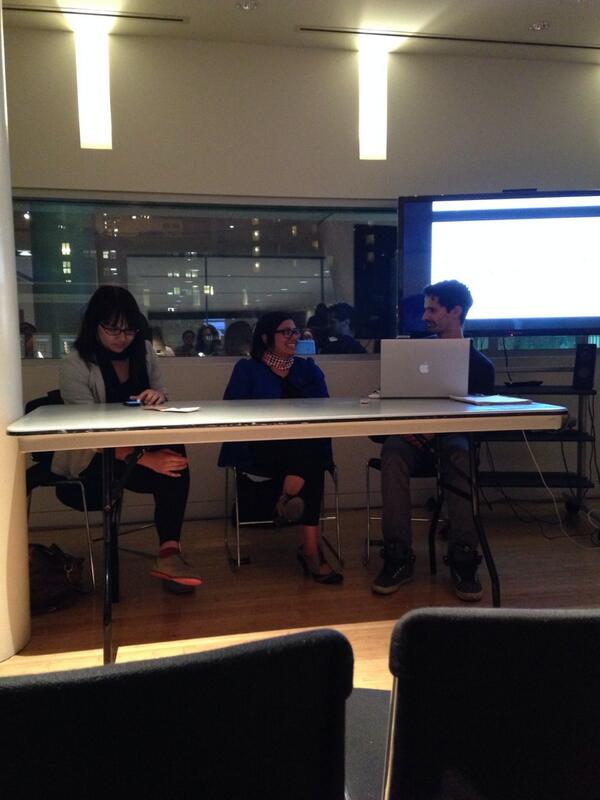 From left to right: An Xiao Mina, Dorothy Santos and Ben Valentine at the Yerba Buena Center for the Arts in San Francisco. Image by Patricia Cariño.

After the wonderful opportunity of co-presenting with Ben Valentine and An Xiao Mina of The Civic Beat, I have to admit, I actually looked up the term “honeymoon period.” The good ole internet actually provided two distinct definitions. Apparently the honeymoon phase for diabetics signals the start of insulin treatment while the Urban Dictionary states, “The three-month maximum period between a person’s entry into a new situation and a person’s complete screwing up of said situation or essential elements of it. This phenomenon is backed by massive amounts of studies in social psychology and even more massive amounts of personal testimony from bitter, angry people.”

The second definition sounds about right. But this reliance on the internet for research needs, a good laugh, and engaging in human rights activism has some disadvantages to it as well. Taking into account the very name of our panel, we tasked ourselves the tough question of whether the internet utopian vision and ideologies of the earlier internet still rang true today. We had three different ways to address the question. Not so surprisingly, I answered with a desire to not forget the body and our sensations. From social networking to internet bots to memes, my plea to the audience for the evening was to not forget our sense of self and body in this highly mobile age.

While technology moves at a feverishly rapid pace, we may find ourselves lost even before we figure out the best way to look, research, and obtain exactly what we need. I decided to focus on how new media artists use the internet and mobile technologies that incorporate the body somehow. Whether through augmented reality or applications to actually embodiment of a fictitious or mythical character or creature online, I found myself interested in how new media artists are dismantling such ideologies.

During the presentation, one of the individuals I focused on was new media artist John Craig Freeman. He uses augmented reality in his artistic practice, which is heavily used by advertisers to overlay landscapes and buildings with branding for marketing purposes. But Freeman uses this technology to interrogate the politics of space. Essentially, anyone with a smartphone and the internet can find out about the objective and purpose of each of his interventionist projects.

For the past year, I have been examining his piece, Border Memorial: Fronteras de los Muertos, which enables a viewer to download augmented reality application Layar. Once downloaded, the user has the option of travelling to specific locations, in this case, the US Mexican border, and holding their phone to the landscape. Calacas or skeletons appear on the screen. These serve as markers to specific spots within the landscape where the remains of migrants attempting to cross the border have been found and identified.

Now, I don’t want to end on such a sad note but you’re probably asking yourself why I’m so interested in addressing the original question or problem statement with emphasis on such a tricky concept of embodiment. Quite frankly, the word alone makes me feel like I’m falling into an abyss. But it also reminds me that the internet has a way of making us forget about our bodies and our senses. Rather, it amplifies this need for us to only focus on vision.

Perhaps, my academic research and investment in IRL, physical activism prompts me to try and strike this unending balancing act. While I do have straddle the lines of loving and hating the internet, I’m forced to have a relationship with it. So I wonder if there was ever a honeymoon period to begin with? Am I not in the dating phase of still getting to know this rhizomatic entity that continues to excite yet infuriate me? Ha! Sure sounds like one a rewarding relationship and like any relationship…one that takes A LOT of work to understand.

honeymoon is over from ben valentine on Vimeo.

Recently thinkers like Katy Pearce, Evgeny Morozov, Julian Assange, and Rebecca MacKinnon have been inspiring me and pushing my understanding the most in terms of how societies and cultures are influenced by the internet. While I am still deeply, deeply excited about what the internet has to offer, their writings and lectures have been pushing me to be more realistic and knowledgeable about some of the real dangers of the net.

In my talk I bounced between polar-opposites in an attempt to make more room for all of the shades of grey in between. Social media is so often talked about as being slacktavism or revolutionary; while I believe that it could become either, the choice is ours, and we are waiting. The same technology in one government’s hands is a weapon, while in another’s a tool for liberation. Being conscious about how those tools can fall from grace, as we have been seeing with the Snowden leaks, is vitally important. Being realistic about the roles these new technologies play in old and new causes alike is crucial as well.

This panel for me, was a way to step back and take stock of where we are technologically. For my talk I wanted to give a firm footing on which we could discuss the activism, art, and culture taking place online, so that we wouldn’t fall into tropes and lies fueled by marketing, or lack of education. We all agreed, the internet is here to stay, activists, governments, artists, and citizens will continue to use it for many means, we only hope that through informed use, critical examination, and creativity that we can help create the net that we want.

As Mina and Santos made clear, there is deeply moving, creative, and intelligent work being done online, and I know we will only see more in the future. But if the governments continue to spy on the netizens so thoroughly, if the net doesn’t stay neutral (see TPP), if free speech laws don’t protect journalism (including citizen media journalists), if all of our human record is increasingly privatized, than we are in for trouble. We are already seeing these things happen, and not just in Iran or China, as we like to think.

Going forward we’re going to need to be realistic about the traits and the potentials of the net and only then can we best navigate it to empower ourselves; to create the vibrant and free communities and culture we want and deserve. I believe that the work Dorothy Santos is doing, what we are doing at The Civic Beat, and many more policy-oriented institutions like the EFF are imperative for making that internet, the internet we want, a reality.