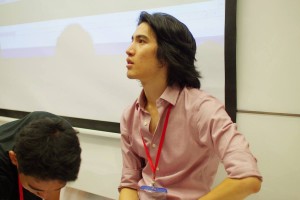 We at The Civic Beat want to elevate the work of important resources and netizens from all over the world. Tech in Asia is an important resource for anyone wanting to know about the burgeoning tech scene in Asia. Anh-Minh Do, an Editor for Tech in Asia, is definitely someone we admire and follow. Based in Ho Chi Minh, Vietnam, Do understands the pulse of the tech scene there, so we reached out and asked if he could tell us a bit about it.

Ben Valentine: What are the most exciting aspects of internet culture coming out of Vietnam? How is Vietnam’s burgeoning tech scene changing the net culture there?

Anh-Minh Do: Currently, I think the most interesting areas include: e-commerce, social media, and mobile. Mainly because many companies are competing in these categories and are therefore pushing innovation there. Big companies like VNG are creating apps like Zalo and others to get millions of users on their platform. Small companies like HaiVL, the 9gag of Vietnam, are also getting millions of users.

BV: You wrote about a study Freedom House did where they found that of Asian countries, Vietnam was the second least free internet, before China. Can you talk about internet freedom in Vietnam in the past and what changes, if any, you have seen since the passing of Decree 72?

AD: I have yet to see any change or enforcement of Decree 72 since it was passed, this is something I noted immediately when the bill was passed despite the international media getting all in a huff about it. In many ways, despite the arrest of bloggers, Vietnam’s internet has actually gotten more lax on a broader scale than two years ago when Facebook was heavily blocked and internet traffic heavily monitored. Now, internet is seen as a political tool rather than a threat.

BV: I wrote about the ways in which netizens were reacting to the NSA leaks, but my collection was mostly from western countries, have people protested censorship or surveillance there in similar ways, how so? How does online culture confront or change under such high censorship?

AD: People haven’t protested Decree 72 at all. In fact, it was broadly ignored by tech folks and the public. I think the decree is a manifestation of legislation that was not clear concerning the arrest of bloggers in the last few years. The decree now gives actual legal precedent to do so. Whereas in the past, it was quite unclear why people were being arrested. Some in the industry have even hailed the decree as good news since it’s more clear what can and cannot be done, now people know exactly what to avoid.

BV: We at The Civic Beat are really excited by creative civic engagement online, and you’ve already written a bit about political uses of social media in Vietnam, what are some other good examples of powerful or funny ways the Vietnamese netizens have engaged politically or socially online?

AD: I think one of the funniest ways comes out of an angst with Vietnamese police. Vietnamese police are the public’s face of corruption and bear the brunt of public ridicule and what used to be fear. 5 to 10 years ago, people feared the traffic police a lot. That was because these people could fine you while you were on the street for unknown reasons. But over time, people have learned that the police are just a nuisance and a part of the fabric of society that everybody just has to deal with. Thus, youtube has had a few very funny situations in which people filmed policemen doing stupid or funny things and transposing it with hilarious editing or it just goes viral on its own. This is one example, two policemen fighting on the street. They got into the fight because one policeman was taking a break when he shouldn’t have:

BV: In your profile you say you’re keeping your eye on “the budding Southeast Asian web-influenced cultures.” What do you see as the biggest differences between Western web culture and Southeast Asia’s?

AD: Hm… I think one of the biggest differences between Asian and Western web cultures is that privacy is completely different. Westerners are very concerned about privacy. It’s part of the culture, whereas Asians aren’t so much. They embrace social media with an optimism and openness that you would find strange in the West. Most of my American friends prefer to not reveal too much about themselves on Facebook or other channels, whereas Asians will willingly post personal pictures and status updates on their Facebooks. It’s therefore a very public space. Having said that, you will probably not find the same type of intimacy and support you find in Reddit (if you’re on Reddit as much as I am, you’ll know what I mean). This may come out of the innocence that Asian internet still has. Asia is quite a few years behind the West.