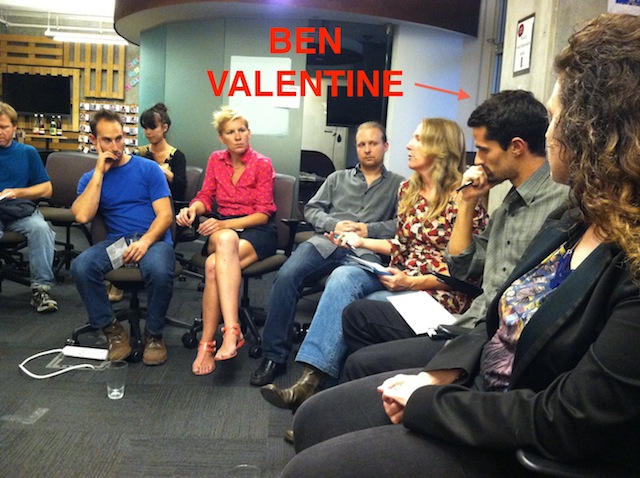 At #ArtsTechSF at Hub Berkeley! Panel led by The Civic Beat strategist and writer Ben Valentine.

Our core team at The Civic Beat have been busy with public outreach these past few weeks!  Here are a few updates:

Ben Valentine moderated a panel on art hacking for #ArtsTechSF at Hub Berkeley, with local artists Kat Parkin and Danielle Siembieda, and The Civic Beat’s An Xiao Mina. The panel received a review from KQED’s Emily Eifler, who wrote, “It was great to be faced with a mindset so unlike my own, the internal contradictions and struggles of people who both loved technology’s potential and feared how it could be used against them.”  Thanks to Jaki Levy and Amanda Spector for organizing!

Ben Valentine penned a long, excellent piece in Medium on humorous and creative responses to the leaks about NSA surveillance.  Check out his article, “Networked Culture and Surveillance“:

Using memes can be a welcoming invitation for further investigation, especially as secretive and uncomfortable as one of mass surveillance. If the conversation starts and ends only with the cryptic powerpoint slides and technical information about metadata, the audience and impact is greatly limited. Shrouded in secrecy, many are demanding the NSA reveal the extent of the surveillance, and reexamine the checks and balances which hold accountable. By creating spaces for humor and play, these memes invite a larger audience to easily join in a needed public dialogue.

At the incredible meme wall built by the Creative Mornings Oslo Team at Mesh Norway!

An Xiao Mina gave two talks on civic memes in Scandinavia.  The first was at the super fun Media Evolution Conference in Malmö, Sweden, in a series of talks with tech ethnographer Tricia Wang and Know Your Meme co-founder Kenyatta Cheese.  Tricia spoke on her theory of the Elastic Self, part of her doctoral dissertation, and Kenyatta told the history of animated GIFs.  An covered a variety of global civic memes in the context of courage and Maya Angelou.  After you’re done, be sure to check out their group Q&A.

After that, she took a train on up to Oslo, Norway, where she spoke at Creative Mornings Oslo on the topic of “Urbanism” and how memes are a form of street art on the internet. This time, she focused on an introduction to Chinese memes, looking mostly at what was going on in 2011. It was a featured talk for the month, too!