The British drink tea, the French drink coffee, and the Spaniards eat merienda.  And the Swedes?  They have fika, an essential snack between meals. Remember that scene in Lord of the Rings when the hobbits ask about second breakfast? Think of fika as second breakfast, second lunch and third lunch all fit together in one word.

Fika takes the form of a light snack, like a cake, cookies or sandwiches, complete with a selection of teas and coffees.  It’s an assumed part of the day in the countryside but it can also be popular amongst busy city dwellers. It’s an assumed part of the day, whether it’s at work or at home. It’s a way of living for a Swede, but it can differ depending on where in Sweden you live.

In the countryside it’s consumed every day on set times between meals. The fika will contain both coffee and a sandwich or something sweet like cinnamonbun. In the cities it can mostly be just coffee. It is however tradition in offices in the cities that you start off a meeting with a client with coffee and something sweet. It’s considered good manners to offer something more than just something to drink. When it comes to city dwellers’ free time, it’s a casual way to meet up and hang out; either as friends or something more. It’s a perfect casual date. 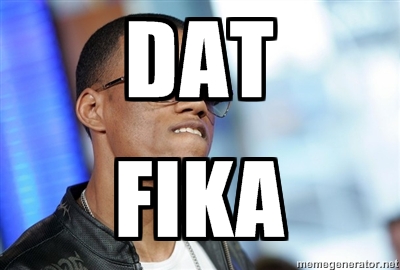 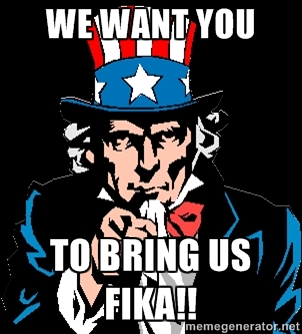 When you plan to have guests over, you’ll spend time preparing the perfect fika. It’s not quite the commitment of dinner or even lunch, but it’s just enough to help them feel appreciated (and full!), and like coffee, it’s perfect for a work meeting or a first date.

So beloved is fika that Swedish netizens have produced a wide variety of memes about the meal.  Many of them take a visual form familiar to Americans, with images and caption styles pulled from popular sites like memegenerator and Reddit.  There’s a Fuck Yeah Fika Tumblr (of course!), focused on vegan fika photos, and The Swedish Fika Facebook group has over 76,000 likes. This probably reflects some of the close cultural ties between Sweden and the United States, especially as the majority of young Swedes speak English almost fluently.
Because life without fika is not a life at all, but a sad sad existence.  Here are a few of our favorites.  The first batch come from pop culture, using both English and Swedish to communicate a message: 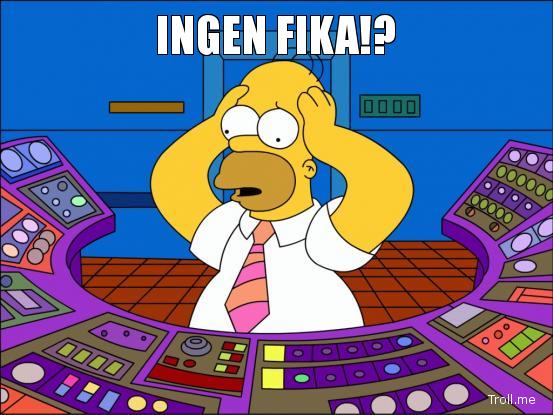 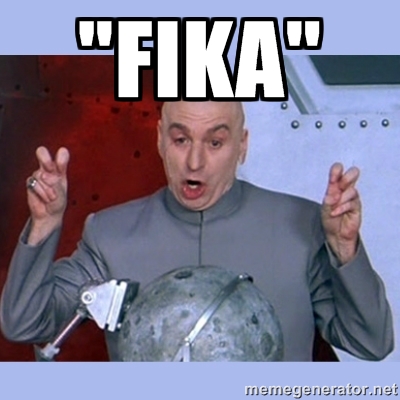 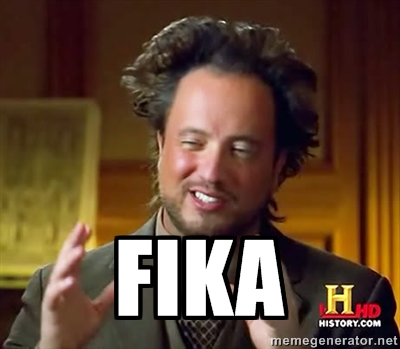 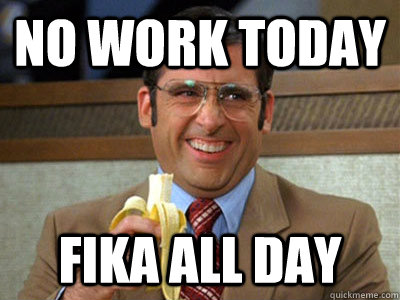 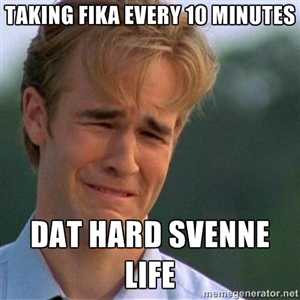 And then of course there are the memes that use meme language, pulling from the Western visual vernacular of rage faces and out of context photos. These are very different from memes about Sweden from the United States (and we’ll look at that more closely soon). These mostly come from Swedes themselves. 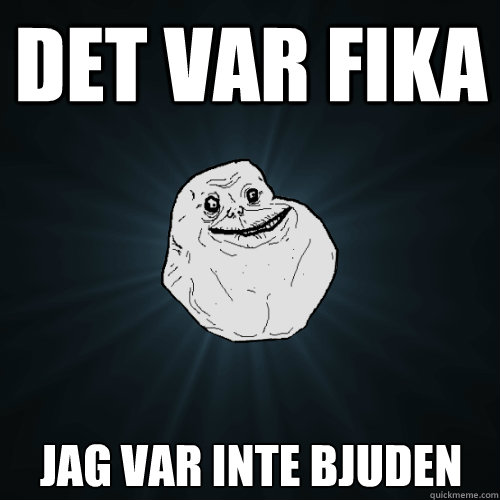 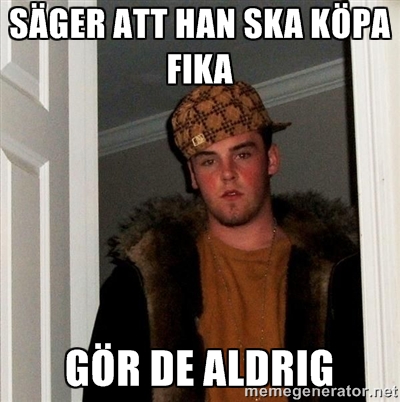 Scumbag Steve gets in on the game. Translation: “Says he’s gonna buy fika. Never does it.”
Source: http://cdn.memegenerator.net/instances/400x/28500151.jpg 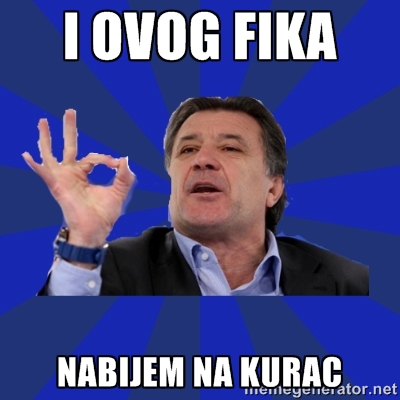 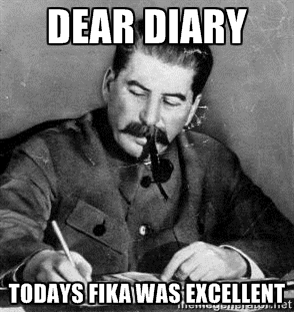 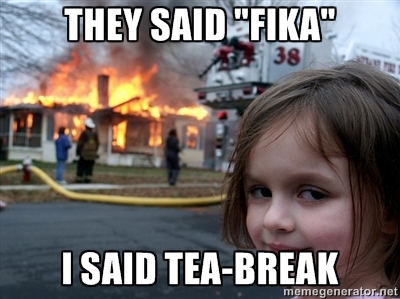 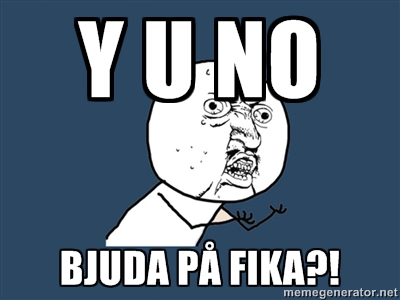 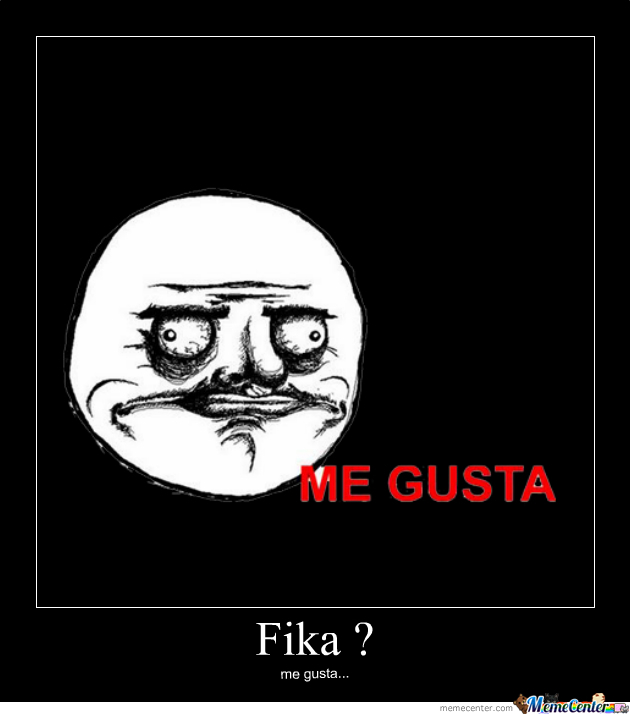 The word fika, I decided, had all the hallmarks of a potent local spirit, the sort that could stand in for paint stripper on an identity parade and would give you a headache as soon as look at you.

My second best guess was that fika involved some kind of furniture shop with utensils made from see-though lime green plastic.

Happily, both guesses were wrong.

Fika, as it turns out, is something of a social institution in Sweden.