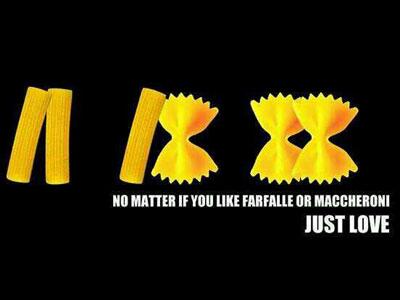 Guido Barilla, chairman of the Barilla Group pasta empire, is apologizing for his remarks last week about gay families. Last Thursday, The Independent reported that Barilla expressed his views on La Zanzara, an Italian radio show: “I would never do an advert with a homosexual family…if the gays don’t like it they can go an eat another brand. For us the concept of the sacred family remains one of the fundamental values of the company.”

Today, Barilla has already issued multiple apologies.  When you visit barilla.com, you are re-directed to barilla.com/position.html, which includes a length statement starting with the following:

At Barilla, we care about everyone, regardless of race, religion, belief, gender or sexual orientation. Our mission is to help people – every single person – live better, by bringing wellbeing and the joy of eating into their everyday lives.

In a video apology posted to Barilla’s US channel, Mr. Barilla notes that, “Through my entire life, I have always respected every person I’ve met, including gays and their families, without any distinction.”

There’s already a parody video from comedian Josh Rimer, in which he states, “I have the utmost respect for any pasta, without distinction of any kind.”

Rimer’s riff emerges from a larger hashtag trend that formed around #BoycottBarilla and #BoicottBarilla.  The visual creativity was stunning, not quite on the scale as the marriage equality meme we wrote about earlier but still a great showcase of humor and sarcasm in light of Mr. Barilla’s original remarks. Here are some of our favorites.

Some of the earliest ones we noticed were pictures of Barilla pasta boxes in the trash and photos of alternative pasta brands. One couple even made their own pasta in protest. These images are important as they helped normalize a behavior and provided a simple, actionable response that could be easily shared on social media networks. Given Barilla’s popularity, most families have at least one Barilla box in their pantries.

#boicottbarilla #boycottbarilla This is where Barilla pasta belongs! I won’t feed this slop to my kids! pic.twitter.com/5k5M8QZV2C

Making gay pasta for my gay husband, because there’s no correct recipe for a family. #BoycottBarilla pic.twitter.com/iJEYz5izYd

And straightforward statements calling for the boycott:

#boycottbarilla Part of what capitalism IS, is not telling your customer you don’t want them to by your product. pic.twitter.com/OA6OIrpNcX

Things got interesting when remixes of Barilla box logos and pasta started popping up. Some of them were quite clever, using pasta as a metaphor for love and partnership.

You should be able to share food with the ones you love. No matter who you love. #boycottbarilla pic.twitter.com/GpCet9XHu2

Family is made of love, not traditions.I’m happy to respect Barilla’s choices by buying another brand #BoycottBarilla pic.twitter.com/1flrv57t4u

Vladimir Putin of course had to make an appearance. Remixing Putin into gay images has become something of a meme in response to the Russian government’s continuing intensive crackdown on the queer community in the nation.

Other pasta companies soon joined in on the meme to express their support of gay families… and other activities. We’re still researching if these are real messages from brands or are remixes, but the important part is here is pointing another way for activists who still want to eat their pasta. This makes sense–if an infographic from @BoycottBarilla is to be believed, there was a huge international response from Western nations:

Barilla. ChickFilA. When will the hate stop? Even if they weren’t a client, I’d buy this pic.twitter.com/0f3SYmjES1 #PastaForAll #BoycottBarilla

And in a reflection of both Barilla’s international reach and growing international acceptance of gay marriage, #BoycottBarilla happened in multiple languages:

The incredible variety of memetic images and the overall response from the international community of gay rights supporters are a testament to just how strong the community has grown on social media. It took just a few days–three really, if you only count business days–and Mr. Barilla shifted from a blanket statement against gay families to a video apology.

Check out the original Independent article that sparked the boycott in the first place:

“Everyone has the right to do what they want without disturbing those around them”. But then the pasta magnate upped the ante by attacking gay adoption. “I have no respect for adoption by gay families because this concerns a person who is not able to choose,” he said.

The Oregonian also has a good summary of responses online that triggered the about face from the chairman:

The most-prominent petition was launched by Dario Fo, an Italian Nobel Prize winner, director, and actor who starred in Barilla’s first TV commercials, where he saw first-hand how the brand was “synonymous with Italy, with home, and with family.” The petition asks Barilla to “return to the spirit of those commercials” and “a voice of the present” by  producing advertising that includes gay families.

By noon Monday, more than 54,000 people had signed the petition.