Editor’s Note: This is a reblog of a blog post by the Istanbul-based researcher Arda İbikoğlu originally titled Protest Humor: “Let’s use disproportionate intelligence!” İbikoğlu was generous enough to offer his permission to reblog it here.

I have shared some protest graffiti before. This time I will try to translate some other examples of ingenious protest humor. This is gonna be fun!

My all-time favorite cartoonist Selçuk Erdem’s tweet on June 3, is both an example and a summary of the power of humor in Gezi protests: “Let’s not throw stones. Let’s throw jokes. Let’s use disproportionate intelligence!” One of the things I’ve learnt in these protests was how police could provoke peaceful protesters  by using disproportionate violence. Experiencing such unreasonable levels of violence on themselves and their friends, the protesters would get angry and agitated. They would strike back with whatever means were at their disposal, usually just stones and clubs. This, in return, would pseudo-legitimize police’s use of violence as they would then appear to be in a struggle to contain violent protesters. The Gezi protesters have demonstrated their ability to collectively control their reactions and nullified such baiting tactics by the police, to a great extent. This, obviously, reduced the number of tools available for peaceful protesters tremendously. However, as the Gezi protests demonstrated, “the use of disproportionate intelligence” is a great weapon that damages the opponent’s reputation while uplifting morale within ranks. Oh yes, time for some examples! 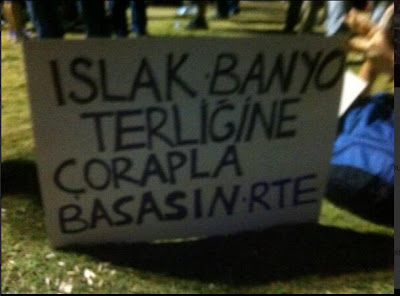 Here is a perfect artwork that plays with the AKP emblem. No commentary needed! 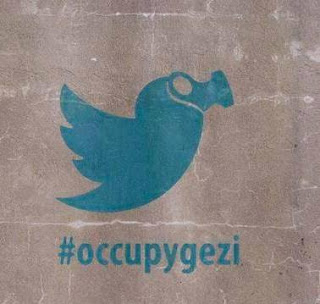 Another piece that symbolizes the #occupygezi’s reliance on twitter. Just perfect! 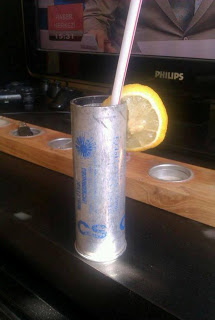 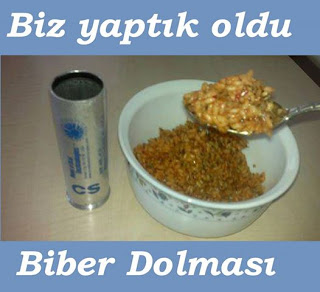 These two images are awesome examples of reappropriating the opponent’s arsenal through disproportionate use of intelligence. The empty cases in these images are empty tear gas cannisters. The first one is used as a lemonade cup with a sliced lemon and a straw. The second one is even better. Tear gas is called “pepper gas” (biber gazı) in Turkish. As you know, Turkey has delicious pepper dolma (biber dolması), i.e. fat green peppers stuffed with rice. Well, there is a stuffed pepper for you! 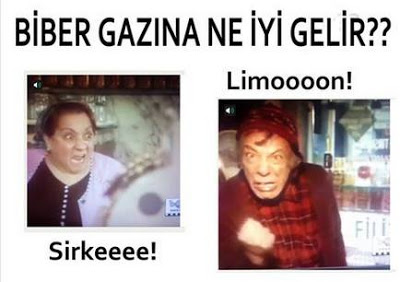 Unless you lived in Turkey throughout the 1980s and 1990s, you will most likely miss the reference in this one. The actress on the left is Adile Naşit, and the actor on the right is Münir Özkul. They are both veterans of Turkish cinema. I grew up watching their movies. These two scenes are from the same comedy movie Neşeli Günler! (1978 – Happy Days!). This couple, with six kids, have a shop where they sell pickled vegetables and pickle juice. In the opening scenes of the movie, they get into a huge argument about whether the best pickles are made with vinegar or lemon. I really want to congratulate the genious who made the connection between that argument in that movie and tear gas. As you might know, lemon and vinegar are both very helpful in soothing the effects of tear gas! (In case you were wondering, the argument between the couple ends up in a divorce and she leaves the house with three of the kids in a heartbreaking scene. The movie is about how the kids find each other many years later and eventually convince their parents to come together again.) 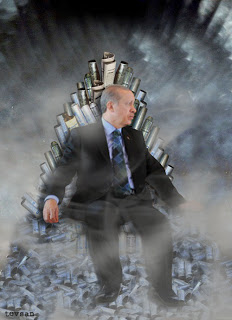 Erdoğan sitting on a throne of empty tear gas cannisters. It is quite a powerful image. The shape of the throne is another reference to famous TV series, Game of Thrones, based on George R. R. Martin novels. 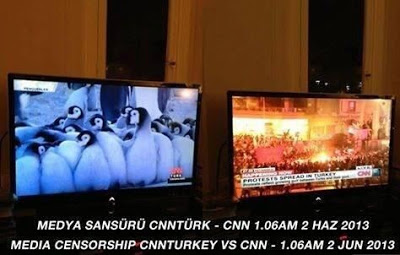 If you were wondering how the penguins got involved in the Gezi protests that very quickly enveloped the entire country, here is why. At 1:06 AM, on June 2, at the peak of demonstrations and clashes, CNNTÜRK, a franchise of CNN, was broadcasting a documentary on penguins, whereas CNN International was broadcasting the ongoing events live on the ground. This irony was not lost to the protesters and soon penguins became somewhat of a symbol for #OccupyGezi. 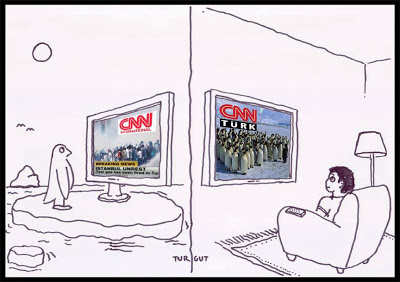 Above is a cartoon mocking CNNTÜRK. 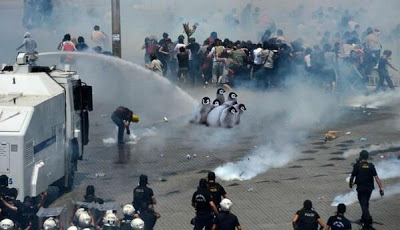 And the penguins were spotted in the protests.

Then the mockery got out of control of course! A video from Bobiler.com“To Chapul”

On June 2, during the peak hours of protests and clashes, Prime Minister Erdoğan identified the protesters as  “birkaç çapulcu” (a few marauders). Çapulcu almost perfectly translates as marauders: 1) Those forces of the army that harassed and looted settlements on the other side of the border; 2) Looters during public upheavals. This identification was widely perceived as another arrogant remark by Erdoğan and pulled even more people into streets in protest over the following days. Then, as in the case of empty tear gas cannisters, protesters reappropriated “çapulcu” and deployed it as a humorous tool against Erdoğan and the government. For instance check out this wikipedia entry on “chapulling“, or this video below!:

Everyday I’m Chapulling! The next video is in Turkish but you might want to take a look if you need a crash course on this new verb in English:

And finally an international Çapulcu below! 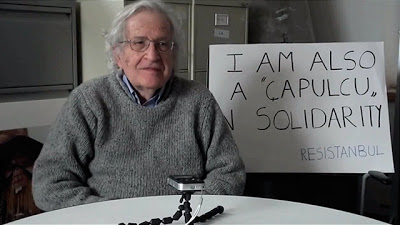 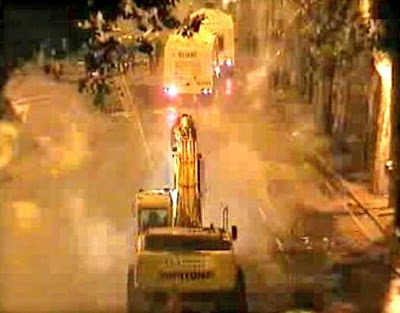 Beşiktaş FC fan group Çarşı (together with Fenerbahçe and Galatasaray fans) have been on the front lines of the clashes since the beginning of the protests. Çarşı fans even chased TOMAs (Toplumsal Olaylara Müdahele Aracı – Vehicle of Intervention in Public Events) with a bulldozer they got hold of. They eventually captured a TOMA as well, which they re-named as POMA (Polis Olaylarına Müdahele Aracı – Vehicle of Intervention in Police Events). Below is supposedly the account of the interaction with the police chief on radio when they captured the vehicle: 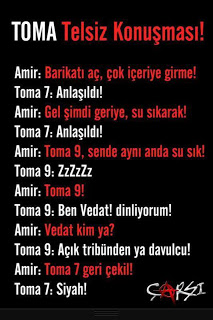 The final “Black!” of Toma 7 is the beginning of the chant for Beşiktaş with jersey colors black and white. Almost a week after that incident, I came across this picture earlier today: 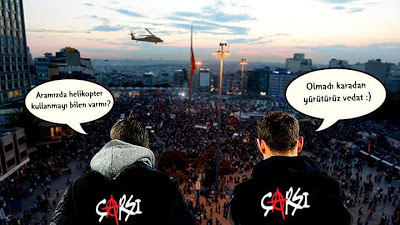 Excellent joke about capturing a helicopter this time (while underlining the continuing airborne surveillance of Taksim Square) with a reference to Vedat, the POMA-captor!

The humor of Çarşı fans is also visible in the video below where Beşiktaş FC Çarşı fans call on the police to join the chant. They shout “Red” and the cops they have been fighting shout back “White” – in the colors of the national team. Emphasis on  mutual connections through the national football team is somewhat disarming after all…

The common theme in all of these humorous protests seem to be reappropriation of a tool in the opponent’s arsenal and its redeployment through the use of “disproportionate intelligence”. Let’s conclude with an excellent performance, which mocks Erdoğan’s identification of a protest method – hitting pots and pans together – as “Pots and pans, the same old tune!”:

Arda İbikoğlu
Arda İbikoğlu has a Ph.D. in Political Science from the University of Washington. He is an expert in Turkish and Middle East politics and his research focuses on Turkish political prisoners and changing state-society relations in Turkey from the Ottoman Empire to the present. He has published articles and book chapters on this subject, including an article featured in a Special Issue of Studies in Law, Politics, and Society that highlighted the “next generation” of interdisciplinary legal studies. He is currently a postdoctoral researcher at Boğaziçi University in Istanbul.